How we put IPFS in Brave

You may have heard the news: as of release 1.19.86 (opens new window), the Brave browser has officially added InterPlanetary File System (IPFS) (opens new window) support! This work is the result of a multi-year effort to bring the two projects together. In this post, we discuss the process in bringing this collaboration to fruition, and take a look under the hood to see how we accomplished this integration!

This integration between IPFS and Brave is itself the product of a long-running experimental collaboration that began in 2017 (opens new window), back in the days when the Brave UI was still powered by Muon (a fork of Electron). In fact, this initiative got as far as a proof of concept implementation (opens new window) that provided for the resolution of the IPFS URIs in Brave’s address bar! 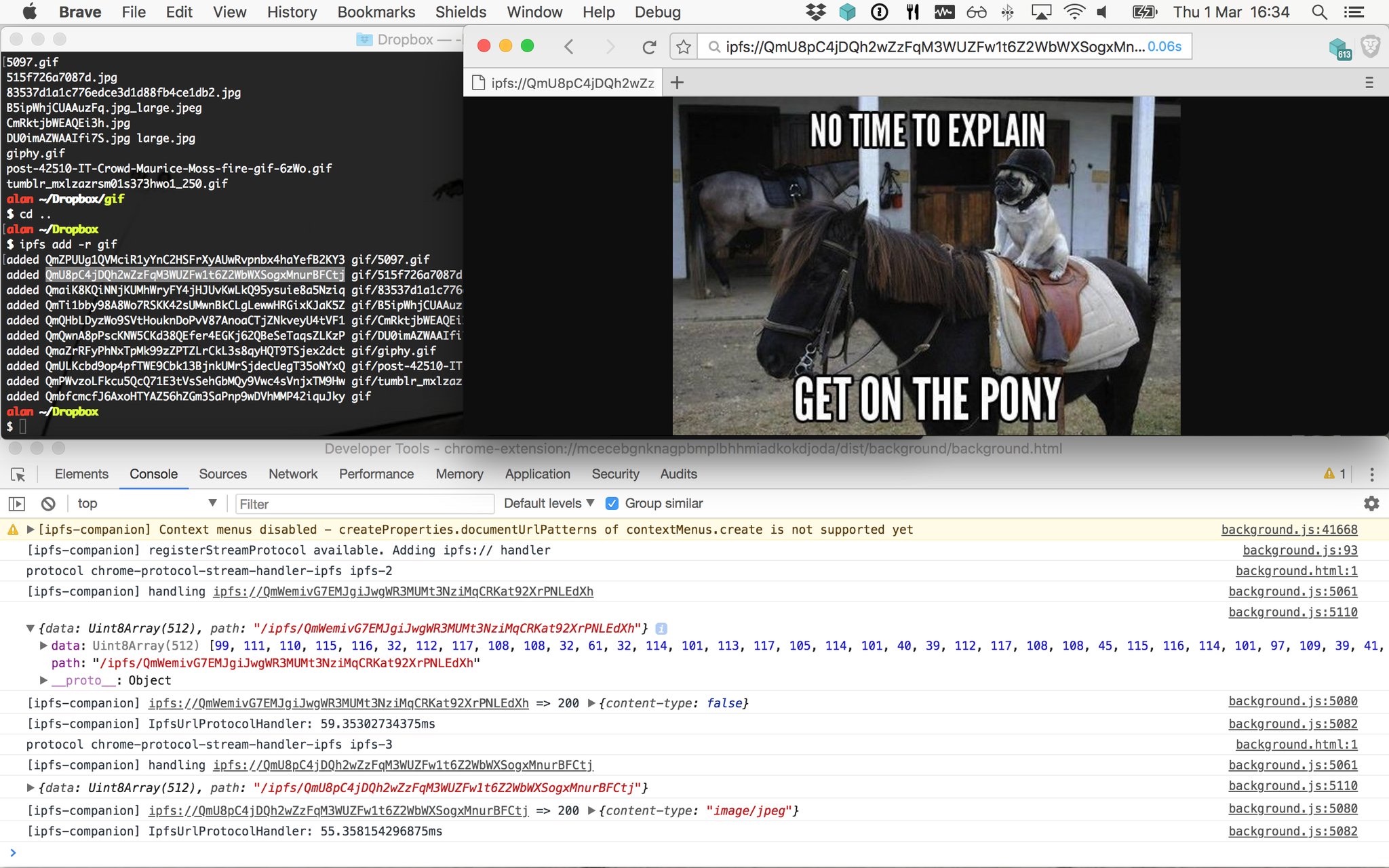 Shortly after this initial success, however, Brave switched to Chromium for its engine. While this was a set-back for IPFS integration in the short-term, this early work laid the foundation for recent efforts at combining the two projects. The switch also gave Brave full compatibility with Chromium browser extensions to Brave, allowing users to take full advantage of the IPFS Companion extension (opens new window) while we developed a native solution.

Over the next two years, the teams behind Brave and IPFS would continue to come together to work toward full IPFS compatibility within the browser. New plans (opens new window) were made, and contributors from both teams and the broader community (opens new window) began to chart the path toward this vision. In the interim, control over the browser source code allowed the teams to more tightly integrate the IPFS Companion extension into Brave: the Chrome sockets API (not normally exposed to Chrome Apps) made it possible to embed a js-ipfs node with true TCP transport (opens new window) within the extension, and Brave updated their settings menu to include a one-click install (opens new window) of the Companion.

Eventually, a confluence of factors, including the deprecation of the Chrome sockets API (opens new window), generated a push (opens new window) to get a full IPFS node running, fully managed, within Brave. After six months of work, we have finally realized this long-term goal!

A key goal of this integration was to make the use of IPFS as seamless as possible for users, while also respecting and preserving their control over the browser. When users enter an ipfs:// or ipns:// URI into their address bar for the first time, Brave will issue a prompt, asking whether or not they would prefer to resolve the link using a public IPFS gateway (opens new window) (by default, Brave uses https://dweb.link, though users can configure this) or via their own local IPFS node, managed by Brave. Initiating a Brave-managed local node is also possible through the interface of the IPFS Companion extension.

By supporting multiple configurations and requiring user consent before the deployment of a local node, Brave ensures it is acting in accordance with the original philosophy and vision of browsers as user agents, existing to serve the user, rather than vice versa. The choices of who to trust and whether to run peer-to-peer software on their computer remain entirely in user hands. Run your own node, or delegate integrity validation to a gateway you trust.

If a user wants Brave to run a local node on their behalf, all they need to do is click a single button. Once Brave has permission, it will download the latest release of go-ipfs (opens new window) (currently the most mature IPFS implementation) for the user’s platform. It will then handle all management involved, running the go-ipfs daemon in the background.

Brave and go-ipfs fit together perfectly: go-ipfs provides HTTP interoperability for IPFS, while Brave itself is an HTTP portal. This creates a natural interface between the two, bridging the gap between their feature sets and greatly simplifying integration. Both projects are available for the major desktop environments (Windows, macOS, Linux) as well, so having Brave act as a wrapper for go-ipfs is a solution that works well regardless of platform.

Behind the scenes, Brave stores all IPFS data, including the file repository, inside of a user’s Brave profile. It will fetch updates to go-ipfs when they become available, and will migrate the underlying IPFS repository when necessary. Clearing the browser cache also initiates IPFS garbage collection, clearing any resource not pinned (opens new window) or kept in MFS (opens new window).

Taken together, this means that there is little to no compromise in running a node inside of Brave instead of running a node manually: users get the best implementation of IPFS currently available, along with automatic updates. Nevertheless, the steps taken to isolate Brave-run nodes ensure that users that also wish to run nodes manually will be able to do so without any collision.

This integration marks a major milestone for IPFS, and lays the groundwork for further experiments into improving the experience of interacting with the network via web browsers.

In particular, having native URI resolution in the browser’s address bar opens up a number of different research questions. How should new concepts, like the integrity guarantees IPFS affords, be communicated to users? How do we explain the principles of peer-to-peer networking to a large user base? And perhaps most importantly, how do we bring awareness of non-traditional URIs to users, and help them acclimate to a world where links are preceded by letters other than “http”?

Indeed, such research is already underway (opens new window), particularly in the mobile space (opens new window), thanks to the introduction of IPFS in the Opera for Android browser (opens new window) last year. Nevertheless, there remains a tremendous amount of work to do. By integrating with Brave, the IPFS network extends its reach to millions of potential participants - people from every background imaginable. New interfaces and metaphors are needed to make interaction simple, intuitive, and accessible for all of these users.

IPFS’s collaboration with Brave also provides further momentum for changes taking place with browser ecosystems. This includes increasing the URIs and network protocols browsers are capable of recognizing - the IANA standards body recently approved a number of URI schemes, including ipfs and ipns (opens new window) - as well as pushing to introduce native handling of these protocols in the browser itself, rather than delegating that functionality to separate applications or third-party gateways.

In short, this integration opens a whole new chapter for IPFS, and represents a significant step toward mainstream embrace of a content-addressed (opens new window) web. Through collaborations and research, IPFS is becoming increasingly accessible and easy to use, extending the reach of the distributed web further than ever before.