This blog post is the second of a two-part series about IPFS gateways:

In this second part, you will learn practical tips and tricks for using IPFS gateways in real-world applications:

By the end of this blog post, you should be equipped with the knowledge and tools to use IPFS gateways confidently and systematically debug when you face problems.

Note: The blog refers assumes you are using kubo (opens new window) (until recently known as go-ipfs) since it's the most popular IPFS implementation. This is not to take away any thunder from the other implementations, e.g, js-ipfs.

One of the questions most frequently asked by developers using IPFS in our various community channels is why CIDs aren't retrievable via public IPFS gateways or in other cases, why are CIDs so slow to load.

For example, when you first upload content to your local IPFS node, it's not uncommon to get 504 Gateway Time-out (opens new window) when requesting the CID from a public gateway.

IPFS gateways abstract the distributed aspect of IPFS while giving you a familiar HTTP interface, but that doesn't mean that complexity is gone.

From a high level, when faced with challenges (either slowness or timeouts) fetching a CID from an IPFS gateway, it's typically related to one of the following:

Given all of these factors, it's difficult giving blanket advice. This is where understanding the lifecycle of a CID request to an IPFS gateway is useful as it will allow debugging problems quickly.

When a request for a CID reaches an IPFS gateway, the gateway checks whether the CID is cached locally before attempting to retrieve it from the network.

If the CID is in the gateway's cache, the gateway will respond to the HTTP request with the CID's content.

Note: Cache here can be either an HTTP cache or the local data store of the IPFS node.

If the CID is not in the cache, the CID has to be retrieved from the IPFS network. This is a two-step process:

Note: This assumes that the gateway is separate from the IPFS node providing the CID. However, in many cases they are the same, e.g., when you are running a self-hosted IPFS node to which you pin CIDs that is also a gateway, in which case content retrieval is instant.

When trying to debug why a CID isn't retrievable from a gateway, the most useful thing to do is to narrow down the root cause.

# Debugging with kubo and IPFS Check

If you are running a running kubo (formerly known as go-ipfs) (opens new window) IPFS node, run the following command to determine if any peers are advertising the CID (making it discoverable):

If providers for the CID are found by searching the DHT, their Peer IDs are returned:

If provider records have been found (the list of Peer IDs), the next step is to get the network addresses of one of those peers with the following command:

The result of this command looks as follows:

To check if the CID is retrievable from the returned addresses, copy one of the public addresses and the CID into IPFS Check (opens new window):

IPFS Check will test whether the peer/node is dialable and whether the CID is retrievable from it.

pl-diagnose (opens new window) is an alternative web-based tool that can perform a lot of the steps above directly from the browser.

You case use it to look up providers for a CID, checking if a multiaddr (opens new window) is reachable by other peers, and whether a node is serving the CID.

Note: The term publishing is a bit misleading, because it refers to the publishing of provider records to the DHT; not the actual content. For this reason, you might see the term advertising also used.

When you add a file to an IPFS node using the ipfs add command, here's how it becomes published and discoverable across the network:

Generally speaking, as you add more files to your IPFS node, the longer reprovide runs take.
When a reprovide run takes longer than 24 hours (the expiry time for provider records), your CIDs will become undiscoverable.

To find out how long a reprovide run takes, run the following command:

If you notice that the LastReprovideDuration value is reaching close to 24 hours, you should consider one of the following options:

To manually trigger a reprovide run, run the following command:

Existing IPFS implementations (opens new window) have a caching mechanism that will keep CIDs local for a short time after the node has fetched it from the network, but these objects may get garbage-collected periodically.

In other words, caching is the mechanism by which CID is kept around on the node for a short period until garbage-collected while pinning is a deliberate choice you make to keep the CID stored on the node.

Caching is the reason why requesting a CID for the first time from a gateway can take time while subsequent requests are much faster.

Pinning services are services that run IPFS nodes for you and allow you to upload files and pin CIDs, making them available to the IPFS network. Examples include:

One thing to note about caching is that it is often multi-layered. In addition to caching done by the IPFS node, it's common to add another layer of HTTP caching based on HTTP cache-control headers. Since CIDs are immutable, there's a wide range of caching opportunities, e.g. putting a CDN or an edge cache in front of an IPFS gateway node.

Garbage collection is the process by which an IPFS node frees up storage by deleting data that is no longer required. To read more about garbage collection, check out the following article (opens new window).

# Public vs. dedicated vs. self-hosted gateways

In its simplest form, a gateway is an IPFS node that also accepts HTTP requests for CIDs.

Public gateways allow anyone to use HTTP to fetch CIDs from the IPFS network.

You can find public gateway operators in the public gateway checker (opens new window) and check whether they are online and the latency from your location. 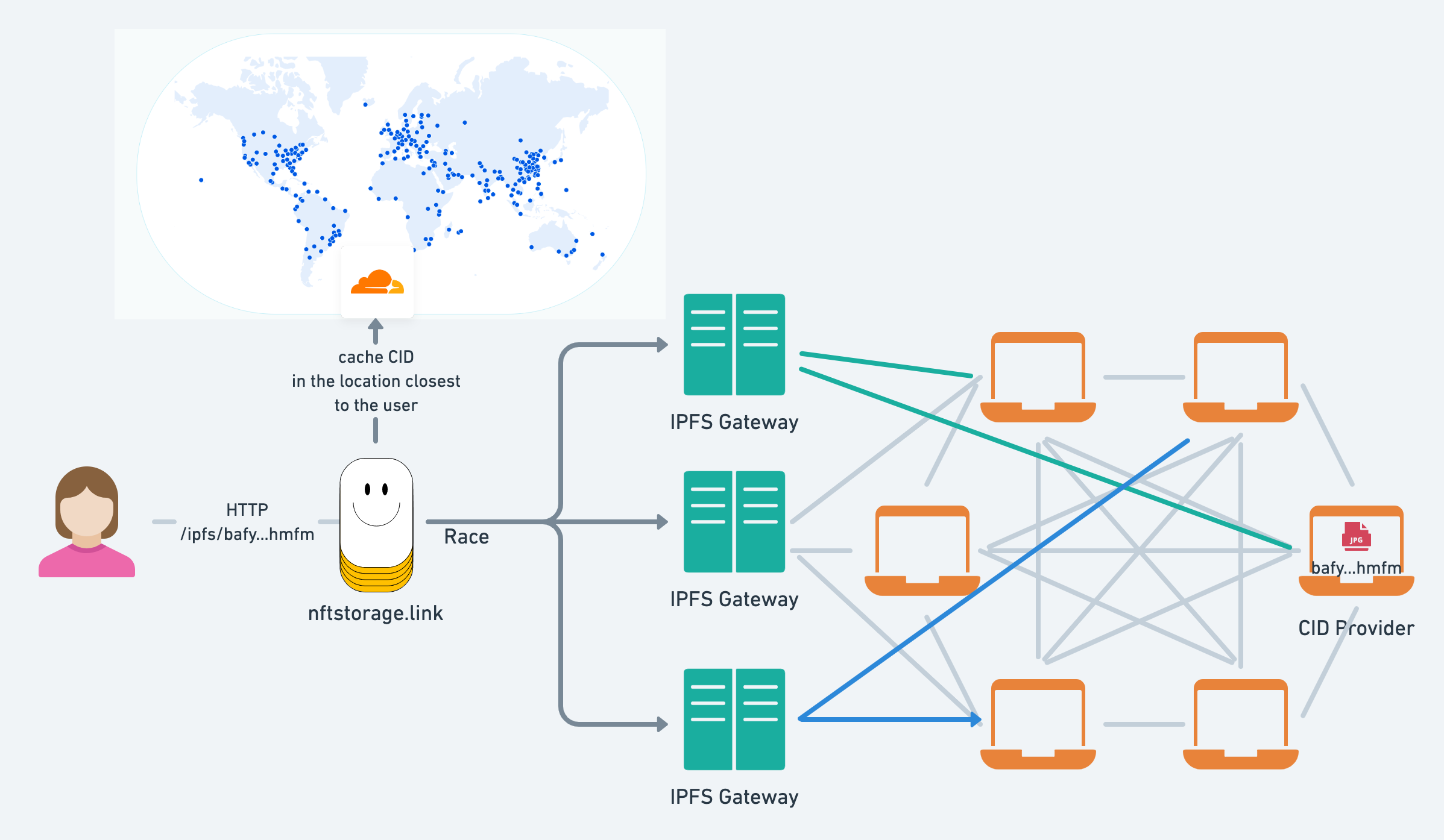 NFT.Storage Gateway SuperHot perma-cache (opens new window) is a paid feature recently launched by the NFT.Storage team, which is similar to dedicated gateways. It gives you the ability to preload your CIDs in all of Cloudflare's 270 points of presence, giving a lightning-fast read experience via the closest CDN location to your users

Finally, a self-hosted gateway refers to an IPFS node(s) configured as a gateway that is hosted by you, either on your local machine or in the cloud.

Choosing from the three approaches depends on your requirements, if performance is critical, self-hosting an IPFS node and gateway or using a dedicated gateway is a reasonable choice that can complement the usage of public gateways.

If you are running an IPFS node that is also configured as an IPFS gateway, there are steps you can take to improve the discovery and retrievability of your CIDs.

Drawing on the principles laid out above, it's sensible to pin your CIDs to multiple IPFS nodes to ensure reliable availability and resilience to failures of nodes and network partitions.

As a general rule of thumb, the more nodes pinning a CID in the IPFS network, the better the chances of it being retrievable.

Using this remote pinning API, you can implement pinning to multiple services (opens new window) as part of your workflow for uploading immutable data to IPFS.

If you're not running an IPFS node, you can start by uploading a file to one service and then using the returned CID to pin it to other services.

# Tip: Use a custom domain that you control as your IPFS gateway

Imagine the following scenario: you deploy your web app to IPFS which contains media with absolute URLs to a public gateway experiencing an outage. For example, your web app displays the image with an absolute path to the CID: https://bafybeibml5uieyxa5tufngvg7fgwbkwvlsuntwbxgtskoqynbt7wlchmfm.ipfs.dweb.link.

You may be able to reach your media using a different gateway, but since the web app's content is immutable, the links to the IPFS gateway which is down will not load.

For these reasons, it's sensible to use a domain within your control to route HTTP traffic to a gateway. This approach potentially gives you the flexibility to implement additional performance optimizations.

Practically speaking, this can be implemented using several approaches depending on your willingness to run infrastructure:

In this blog post, you learned many tips, tricks, and tools to use IPFS gateways effectively, and systematically debug when you face problems.

We started with common challenges with IPFS gateways and went into the details of content discovery, publishing, the gateway request lifecycle, the different kinds of IPFS gateways, caching, garbage collection, pinning, and best practices when self-hosting IPFS nodes/gateways.

As a next step: