go-ipfs 0.4.18 (opens new window) has been released! This is one of largest go-ipfs releases to date; 3 months in the making. Thanks to all our contributors for your awesome work!

The headline features this release are:

First up, on the networking front, this release introduced experimental support for the QUIC protocol. QUIC is a new UDP-based network transport that solves many of the long standing issues with TCP.

For us, this means (eventually):

However, we still have a long way to go. While we encourage users to test this, the IETF QUIC protocol is still being actively developed and will change. You can find instructions for enabling it here (opens new window).

Messages are now signed by their authors. While signing is now enabled by default, strict signature verification has not been and will not be for at least one release (probably multiple) to avoid breaking existing applications. You can read about how to configure this feature here (opens new window).

The new ipfs cid command allows users to both inspect CIDs and convert them between various formats and versions. Here are some examples:

The refactored ipfs p2p command allows forwarding TCP streams through two IPFS nodes from one host to another. It's ssh -L but for IPFS. It's still experimental but we don't expect too many breaking changes after this point (it will very likely be stabilized in the next release).

Here's a quick summary of the breaking changes in this release:

You can find documentation here (opens new window), but here's a quick example of connecting the WebUI of a remote IPFS node:

There is now a new flag for ipfs name resolve - --stream. When the command is invoked with the flag set, it will start returning results as soon as they are discovered in the DHT and other routing mechanisms. This enables certain applications to start prefetching/displaying data while the discovery is still running. Note that this command will likely return many outdated records before it finding and returning the latest. However, it will always return valid records (even if a bit stale).

In the previous release, we added support for extracting blocks inlined into CIDs. In this release, we've added support for creating these CIDs. You can now run ipfs add with the --inline flag to inline blocks less than or equal to 32 bytes in length into a CID, instead of writing an actual block. This should significantly reduce the size of filesystem trees with many empty directories and tiny files.

This release includes the latest, very shiny updated webui (opens new window). You can view it by installing go-ipfs and visiting http://localhost:5001/webui. It deserves its own release note - oh look, it got one! Here's a peek: 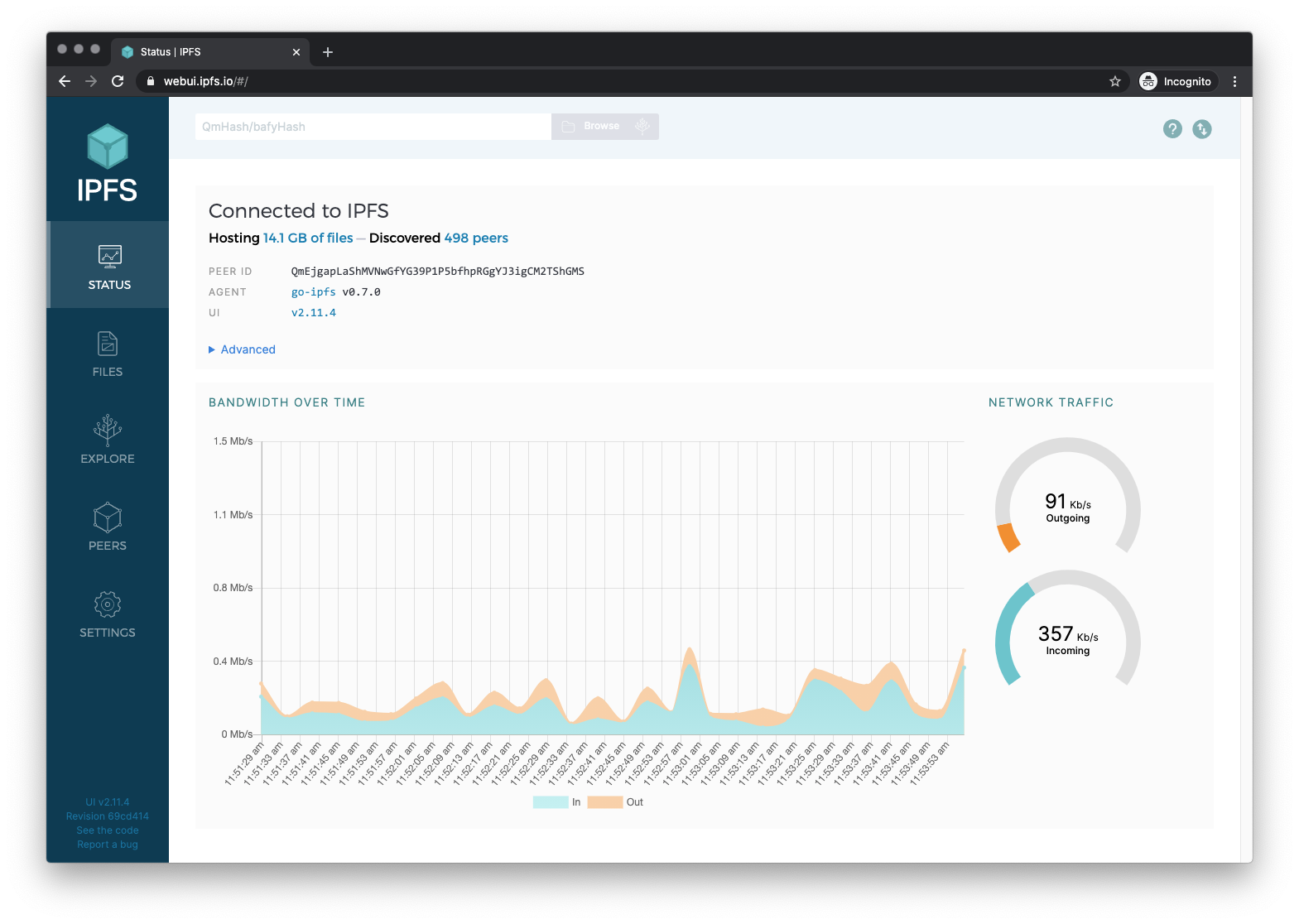 Kudos and thanks to the webui team! 👏

This release includes some significant performance improvements, both in terms of resource utilization and speed particularly when transferring lots of small files (or blocks). This section will go into some technical details so feel free to skip it if you're just looking for shiny new features.

In this release, we've (a) fixed a slow memory leak in libp2p and (b) significantly reduced the allocation load. Together, these should improve both memory and CPU usage. How much you ask? Glad you asked. 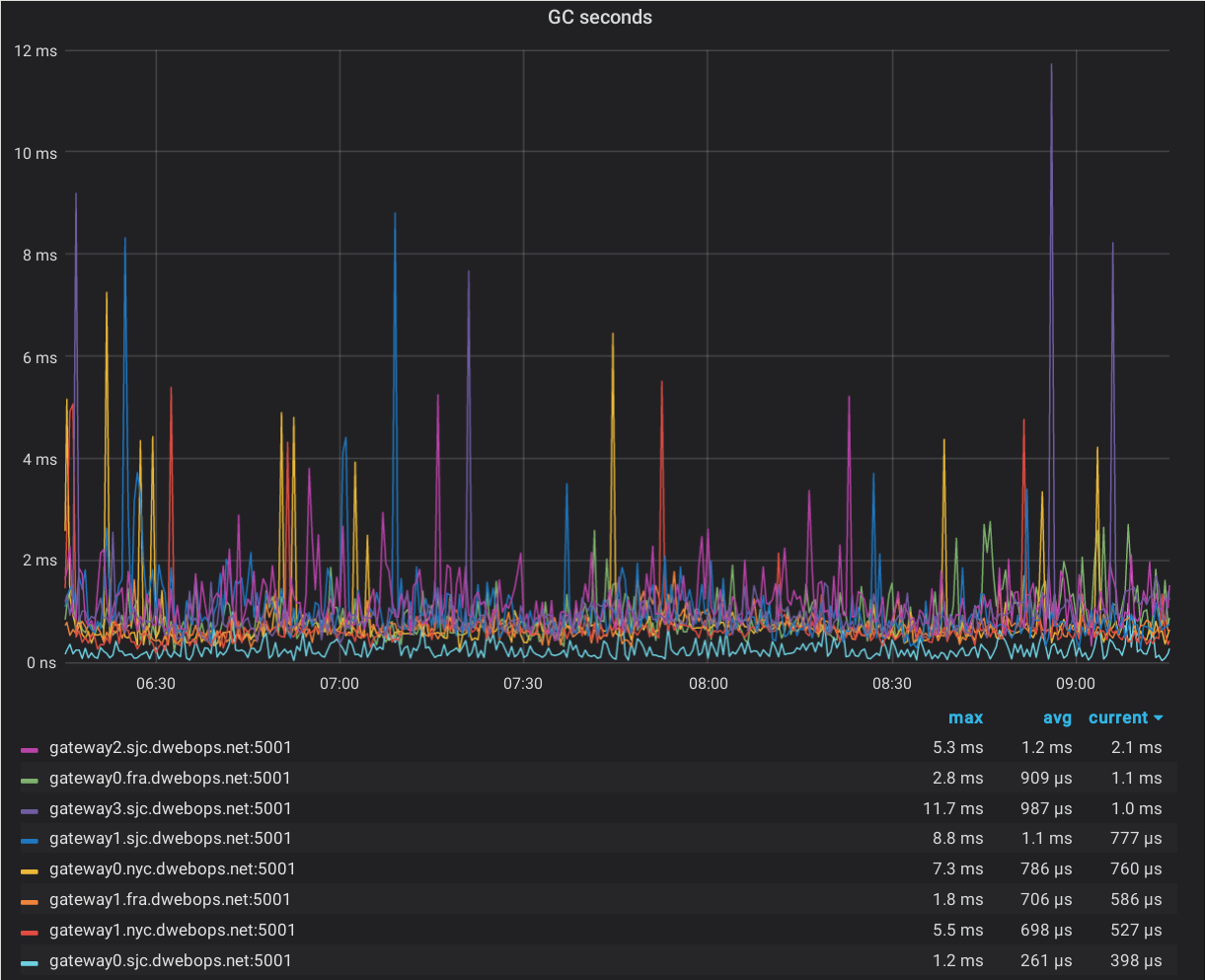 Above is a graph of time our IPFS gateway nodes spend in GC. See the awesome looking light blue line at the bottom? That's the node running 0.4.18. IKR? 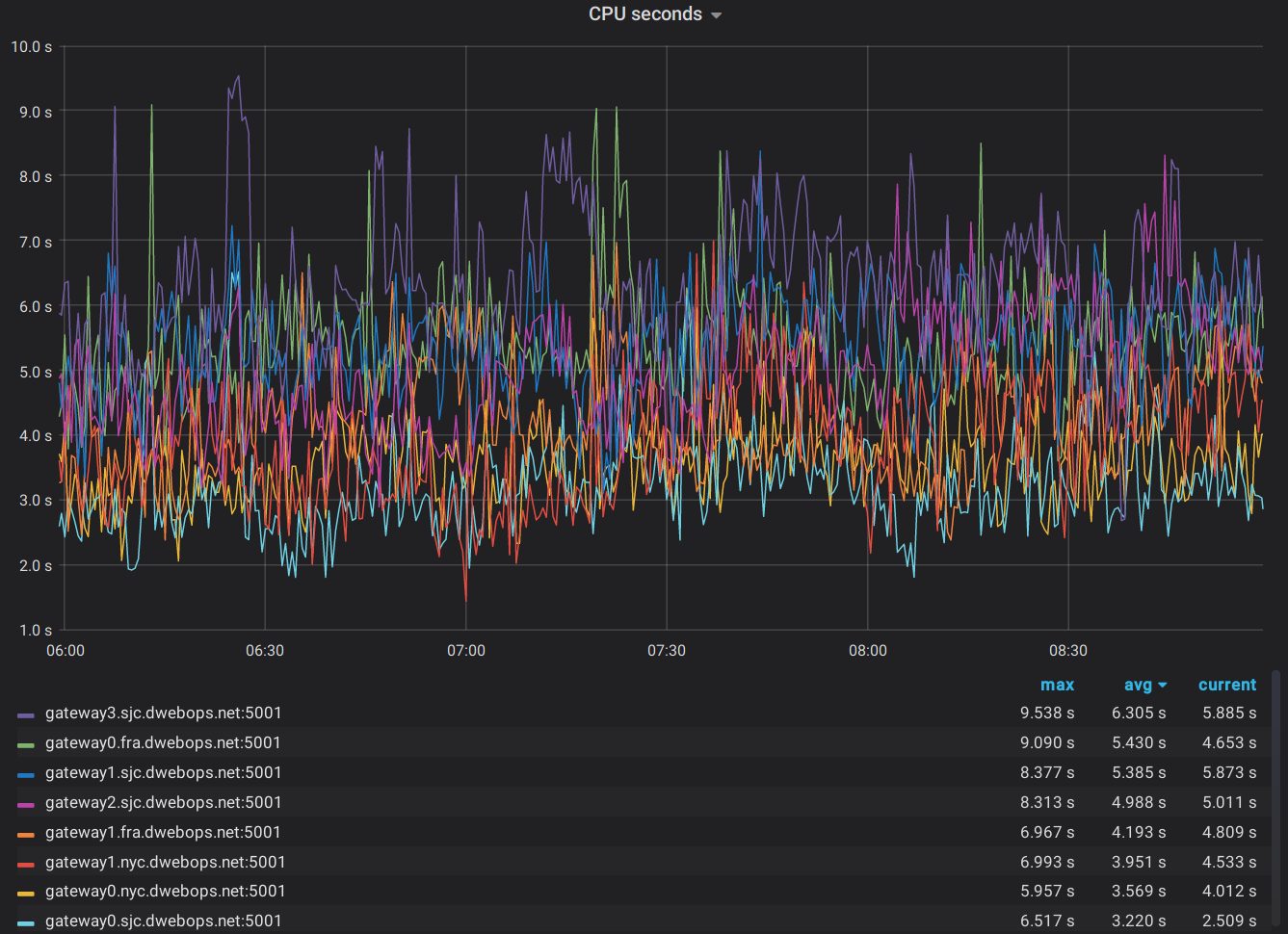 This graph of time spent in execution has greater variability but the improvement is still pretty clear. You want the light blue one.

We've changed two of our most frequently used datastructures, CIDs and Multiaddrs, to reduce allocation load.

First, we now store CIDs encoded as strings, instead of decoded in structs (behind pointers). In addition to being more compact, our Cid type is now a valid map key so we no longer have to encode CIDs every time we want to use them in a map/set. Allocations when inserting CIDs into maps/sets was showing up as a significant source of allocations under heavy load so this change should improve memory usage.

Second, we've changed many of our multiaddr parsing/processing/formatting functions to allocate less. Much of our DHT related-work includes processing multiaddrs so this should reduce CPU utilization when heavily using the DHT.

Streams have always plagued us in terms of memory utilization. This was partially solved by introducing the connection manager, keeping our maximum connection count to a reasonable number but they're still a major memory sink.

This release sees two improvements on this front:

This release saw yet another commands-library refactor, work towards the CoreAPI, and the first step towards reliable base32 CID support.

We've completely refactored our commands library (again). While it still needs quite a bit of work, it now requires significantly less boilerplate and should be significantly more robust. The refactor immediately found two broken tests and probably fixed quite a few bugs around properly returning and handling errors.

CoreAPI is a new way to interact with IPFS from Go. While it's still not final, most things you can do via the CLI or HTTP interfaces can now be done through the new API.

Currently only the Go implementation exists, but there are plans to expose the new API via HTTP soon. We are also looking into creating an RPC interface to this API which could help performance in some use cases.

You can track progress in https://github.com/ipfs/go-ipfs/issues/4498

We're continuing work to upgrade our default CID format to Base32 while preserving compatibility with existing CIDs. We need this change to improve the security of IPFS content in browsers. Currently, IPFS is usually used in browsers by browsing to https://SOME_GATEWAY/ipfs/CID/.... There are two significant drawbacks to this approach:

To fix the security issue, we intend to switch IPFS gateway links https://ipfs.io/ipfs/CID to https://CID.ipfs.dweb.link. This way, the CID will be a part of the "origin" (opens new window) so each IPFS website will get a separate security origin.

To fix the UX issue, we've been working on adding support for ipfs://CID/... to web browsers through our ipfs-companion (opens new window) add-on and some new, experimental extension APIs from Mozilla. This has the same effect of putting the CID in the URL origin but has the added benefit of looking "native".

Unfortunately, origins must be case insensitive. Currently, the most common CIDs are CIDv0 CIDs (those starting with Qm) which are always base58 encoded and are therefore case-sensitive.

This release makes some significant progress towards solving this issue by introducing two features:

(1) The previous mentioned ipfs cid base32 command for converting a CID to a case insensitive encoding required by domain names. This command converts an existing base58 CIDv0 to a CIDv1 encoded using base32.

(2) A hack to allow locally looking up blocks associated with a CIDv0 CID using the equivalent CIDv1 CID (or the reverse). This hack will eventually be replaced with a multihash indexed blockstore, which is agnostic to both the CID version and multicodec content type.

As always, you can find the full (massive) changelog over at ipfs/go-ipfs's Github repository: https://github.com/ipfs/go-ipfs/blob/master/CHANGELOG.md#go-ipfs-changelog-1

Would you like to help contribute to the go-ipfs project?

# ⁉️ Do you have questions?

The best place to ask your questions about IPFS, how it works and what you can do with it, is at discuss.ipfs.io (opens new window). We are also available at the #ipfs channel on Freenode.